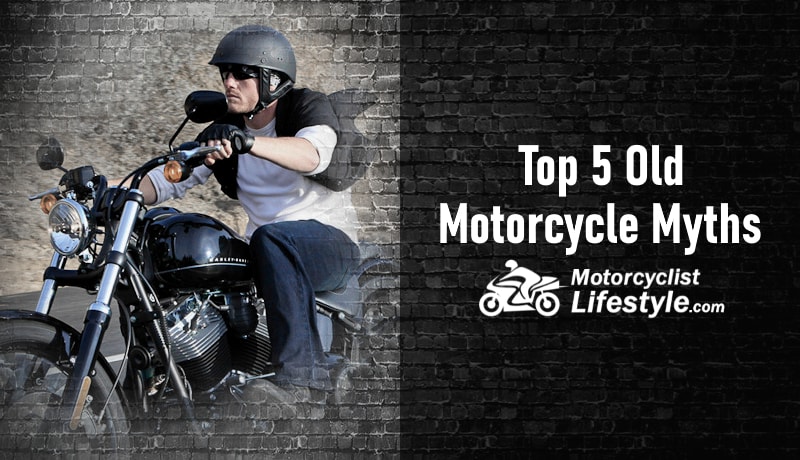 We all were raised listening to the stories about what will happen to you if you ride fast, ride in heavy rain, or suffered any crash. The truth is, we all learned motorcycle riding ourselves. There were no instructors or training school for riders. So, most of the old folks misguided us by telling motorcycle myths or some kind of nonsense about riding.

But, once we all grew up, we began to understand that those stories were nothing but ridiculous myths shared by older riders; however, some of the myths turned out to be true but most of them were total ‘bullcrap’.

Today, I will share the top 5 old motorcycle myths that I believed back in my younger days but after some time I found them to be only stories told by the older generation. Here, are the top 5 Old Motorcycle Myths that you are never going to believe to be true.

Well, as far as I know, it is not totally wrong or right because even now, many instructors tell us to use the rear brakes first. If you require stopping immediately, then you should use both brakes at the same time.

So, from this myth, we learned that you can use rear brakes to slow the vehicle down but if you need to stop immediately then you must use both brakes.

Crash! Lay the Bike Down!

We were also taught that “If you are about to crash your motorcycle, then lay the bike down.” But I am sure you understand this and realize it is wrong to do that.

It is true. You don’t need to lay the bike down because if you do, then it will slide a lot further because of its plastic and metal body.

This action can only work in one situation if you are off-road riding where dirt can slow down the movement of your motorcycle. But, on a tarmac, you must try to stop the bike by applying the brakes hard and leaving the motorcycle upright while slowing it down. This is the best thing you can do in this scenario.

No Lace-Up Boots While Riding

This one is actually kind of funny. My grandfather told me about using no lace-up boots while riding a motorcycle. According to him, if you do, the laces may get caught in the footpegs and you won’t be able to put your feet down when you stop the bike.

That’s why they insisted on wearing elasticized boots, which, in fact, can easily slip off as you slide your foot down.

I hate this old motorcycle myth. We were told to never ride a motorcycle when it’s raining. It will be too dangerous for you and your motorcycle. Your bike will suffer from rust problems and the road will be too slippery to ride a bike on it. However, these days, many modern bikes have a lot of features that can help you to grip on wet roads and can protect you from other things. Tires are also very advanced in modern bikes and they provide a strong grip between the motorcycle and the road surface.

Motorcycle Riders Get All the Women

Uh, huh… I know this one is very funny. But it is hard to deny! This one is the most interesting old motorcycle myth that we have ever heard. Anyway, if you would like to go into more detail, then you can check out Why Motorcyclists get all the Women?

Apart from these, there are a few more old motorcycle myths like loud pipes save lives, you only need a jacket when the temperature is below 20C, plus many others. But, don’t believe in such nonsense. You are smarter than that. And if you know of other myths that we haven’t mentioned in our list, then please share them with the rest of the readers by writing in the comment section below.