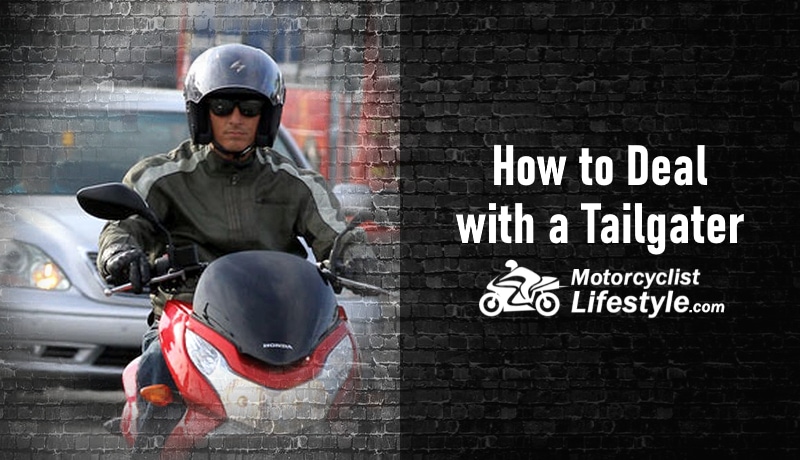 Do you ever face the problem of a tailgater while riding to work or someplace else?

If you do, then you must be extra careful how you deal with tailgaters. Have you ever wondered why this happens? Well, if you don’t know, then let me explain it to you. It is all about the size of motorcycles. Car drivers tend to stay away from truck drivers because of the truck size. Similarly, motorcyclists don’t prefer to closely follow the vehicles ahead of us because of the size and safety issues. Plus, car drivers don’t seem to give as much importance to motorcyclists as they give to the trucks.

But, that’s not the worst part. The worst part is that there are some tailgaters who are total jerks and try to intimidate you to overtake or to offend you. So, you need to be extra careful about such tailgaters.

They won’t let you ride peacefully and disturb you for every chance they get.

So, we have some pointers that can help you to prevent or deal with tailgaters. Why not just take a look at them and see if they are helpful for you?

Your behavior on the road can give you an advantage over tailgaters. If car drivers tailgate you, it doesn’t mean that you should take revenge by tailgating the vehicle ahead of you. Give some space to the vehicles around you and when you pass a vehicle, maybe you should give the driver a wave of your hand to say ‘Thank You’ for letting you pass.

If someone accidentally follows you too closely, you don’t need to be rude or abusive. Yelling won’t make any difference. On the contrary, if the tailgater is doing it to offend you, then it will only make matters worse and you could make the tailgater more aggressive.

To end the tailgating, you can use your riding abilities to accelerate and pass the vehicle in front of you and put another vehicle between you and the tailgater. But, remember to not go over the speed limit; otherwise, the tailgater will try the same thing. Plus, instead of keeping a safe distance you will end up following another vehicle too closely.

Find a Way Out

If you are in massive traffic and think you may be hit from behind, then find a way out. Prepare an escape route.

Switch the lanes to avoid this situation.

There is another way to lose the tailgater. You don’t need to speed up to avoid them. Instead, you can give them a signal by waving your hand, allowing them to pass or you can switch lanes momentarily to let them pass, then switch back to the other lane.

So, going back to the first pointer, be courteous on the road.

Most motorcyclists make the mistake of shutting down the throttle to slow down instead of using the brakes. This means the driver behind you may find it difficult to tell if you’re slowing down or not. As a result, they get even closer to you and end up tailgating.

This situation requires the gentle use of the brakes, so the driver behind you knows that you are slowing down and keep some distance.

If none of these pointers work out, the last thing you can do is just pull over. It’s not like you are in a hurry to do something every time. So, why not let that person go by and you can enjoy the ride and scenery for a while.

I hope these pointers and techniques help you to prepare to deal with tailgaters and you can ride safely without watching your back all the time. If you have any questions, please feel free to write to us in the comment section below.