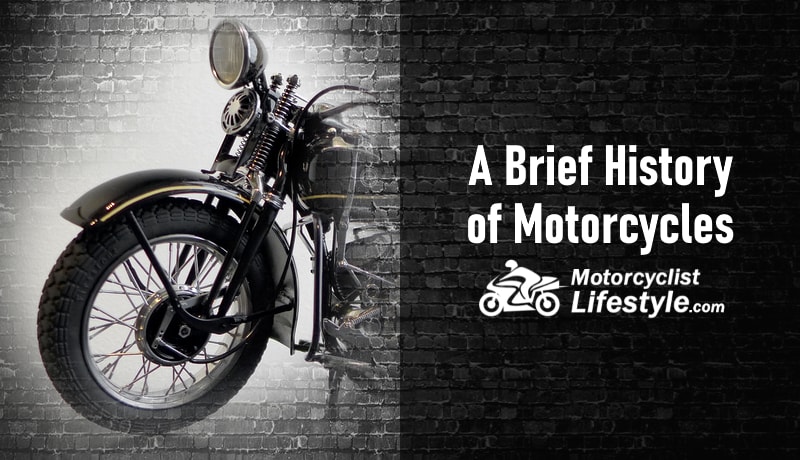 The invention of motorcycles didn’t happen immediately. To understand the history behind the making of motorcycles, you need to go way back to when a wheel first started rolling. Because it all started back then when people began designing vehicles based on wheels to carry their cargo from one place to another. We are talking about carts, chariots, wagons, carriages, etc. These two and four-wheeled vehicles were designed for transportation purposes.

But that wasn’t enough for people like us. We were looking for something light, small, and easy to use to travel from one place to another without using animals. And much later, someone finally did it. Someone used one of the wheels in front of the other and a crank and pedals in between to invent the bicycle. This invention was considered a revolution that didn’t require a horse or someone else to pull something around. Instead, it made a person capable of doing such a thing on his own. This was the time when people finally understood the logic behind this and figured out the way things work. And when the combustion engine was invented, a bicycle wasn’t enough for people. They needed something faster and easier, so they made a motorcycle, which didn’t need an external force to move from one place to another.

So, let’s take a look at the early and current days of motorcycles and how it has changed over all these years.

The major changes in the history of motorcycles began in the second half of the 19th century. But that change was only possible because of early steam-powered cycles and various experiments and inventions. One of the first steam-powered two-wheeler bikes was quite powerful and the actual production started at the end of the 18th century, in the year 1885, with Gottlieb Daimler’s first motor-bicycle.

The most successful motorcycle manufacturer of the 21st century made its first motorbike in 1903. Are you wondering, who?

Then let me tell you. We are talking about Harley-Davidson, who built their first motorbike in 1903. Later, many small changes occurred in engine formats and designs. It was the Henderson Motorcycle Co. who launched the first multi-cylinder bike, which was very powerful, quiet, and less vibration.

A very different change appeared during the time of World War I, when many motorcycles came with sidecars. Thousands of motorcycles were used during that period. But that was also the same period when many Americans were introduced to motorcycling and the motorcycles used in that era were “hard-tails.” One very popular bike back then was the Streamline Super X of Excelsior Motor & Mfg. Supply Co. of Chicago Illinois in 1930, which had no rear and front suspensions but it was one of the best twin solo machines that was equipped with aluminum saddle tanks and many other modern and advanced features. But there is no doubt it was easy handling and had an effortless balance, which had not been seen in previous bikes.

You can say the 1930s era was the early start of major changes in the history of motorcycles. After, two decades, in the 1950s, major changes occurred that included the development of front telescopic forks and rear swing arms, both with hydraulic damping. It was the same period when people saw the combination of the gearbox and motor. And in the 1960s, the Japanese did something amazing. They started the production of two- and four-stroke engines, which increased the popularity of motorcycles even more. From that point on, the number of sales increased by 5 times and many bikes were starting to be seen on the roads. After that, people learned about trail-riding and long-distance trips when trail bikes and big multi-cylinder cruisers were launched.

Over the decades, motorcycles have changed a lot. Now, you will see plenty of motorcycles of different types around you. That time has gone when it took decades to see a major change in motorbikes. Now, every year something new will appear. Even the current motorcycles are consistently being improved. So, let’s take a look at the different styles of motorcycles we have currently.

As we mentioned trail riding earlier, it evolved when motorcycles were everywhere and a trend started with people going trail riding, which people found immensely enjoyable. It was first considered an outdoor activity and later it became a sport. Trail motorcycles are a lot different from other types of motorcycles. The way trail bikes look the way they do is because of its designs and certain features that are quite important in trail riding. For example, trail bikes have a raised exhaust and a double-downtube skid plate aspect that is used for engine protection and keeps it out of the way of logs and rocks. You can see the skid plate with a double-downtube in the image of the Honda Trail 90 Trail Bike. Certain other features include smaller countershaft sprockets, larger rear wheel sprockets, and dual-range transmissions.

If you notice, you will see a big gap between the fender and the tire. Usually, fender clearance is 5 or 6 inches so that it won’t be in the way of a long suspension. Moreover, this specific design prevents mud packing between the tire and the fender.

But, most riders consider the weight as the most important feature. It would be very difficult to pull a heavy trail bike over a log or through mud, but as long as the machine weight is around 200 pounds, it will be easy to handle the bike.

A minibike, also known as a mini moto or pocket bike is a miniature motorcycle that most people use as a standard of powered bike for teaching their children how to ride or for running errands. Any bike with wheels 12” or less can fall into the category of minibikes. Minibikes have cast alloy or pressed steel wheels and two- and four-stroke engines with a chain drive.

Other specific features of minibikes are:

Take a look at the Suzuki Vintage MT-50J Mini-Bike below, which has the following features:

As the name implies, ATVs are designed to travel on a wide variety of terrains where other motorcycles can’t. These jumbo vehicles are made for serious climbing and riding on rough terrain. It is very much like a motorcycle where a rider sits on it and operates it like a motorcycle. But the extra wheels provide stability and control to ride on rough roads and terrains. The first three-wheeled ATV, launched in 1967, was the Sperry-Rand TriCart. After a couple of years, in 1969, Honda launched the ATC90 ATV, which was called the All-Terrain Cycle that has large balloon tires instead of a mechanical suspension.

After that, for more than a decade, there was no major change seen in the ATVs. But, in the early 1980s, suspensions and lower-profile tires were introduced, which changed everything. The result, many ATVs started coming with full suspensions and high-performance engines. Not only that, Honda started designing Sports ATVs, which also had front and rear disc brakes, two- or four-stroke monster engines with lots of horsepower.

Now, from that point to the present, everything changed and become better in terms of looks, performance, power, and strength.

The commuter and tourer are kind of street bikes with all the features, such as more cylinders, low fenders, seats, foot pegs, lights, turn signals, and extra instrumentation as required.

The extra instrumentation or equipment varies with the individual. Some need a sidecar, windscreens, and other features as required.

The normal commuter bike usually has 90 cc to 250 cc with an electric start. However, the combination of Commuter-Tourer street bikes are from 250 cc to 500 cc.

To run off-road and on-road, manufacturers designed the Dual-Sport Motorcycle, which is a combination of a street and trail bike.

These bikes are specifically designed to compete in off-road trail riding competitions and go long distances on the road. However, Dual-Sport motorcycles also have a high exhaust system, protected engine, lower folding foot pegs, and lower gearing than street motorcycles.

These types of bikes are suitable for those motorcyclists who enjoy both off-road/on-road riding and can’t afford two different motorcycles. The Harley Dual-Sport motorcycle is a perfect example of a current Street and Trail combination.